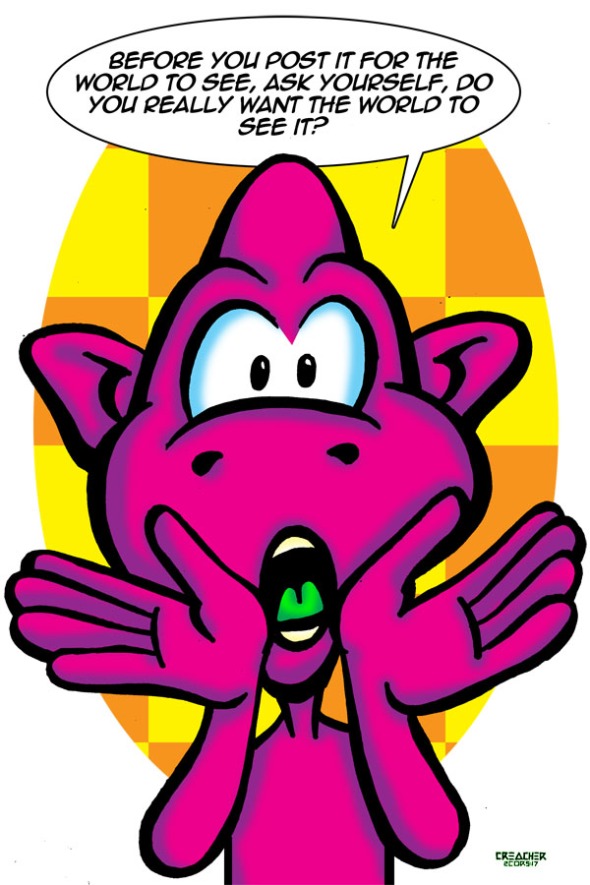 CREACHER Social Media Warning
Are you sure you want to post that?

Facebook would be the third largest nation in the world. What you put out there will be seen. Be careful! 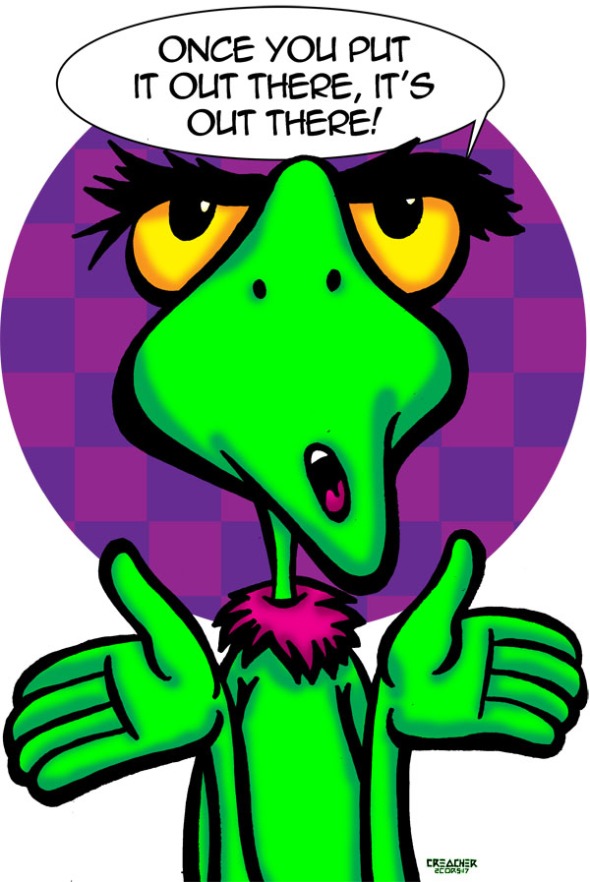 In the world of social media, what goes out there stays out there. So be careful.

The Bible is the owner’s manual for Life. To understand your story, read HIS Story. 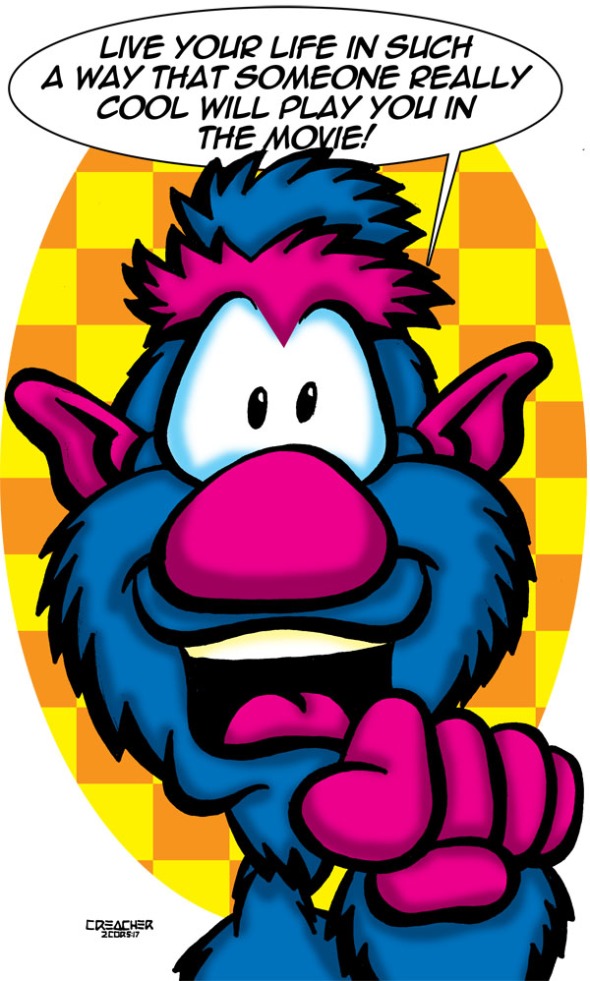 Okay so maybe they’ll never make a movie of your life, and maybe this sounds superficial, but the truth is we should all want to live a life that is remarkable, interesting and significant. 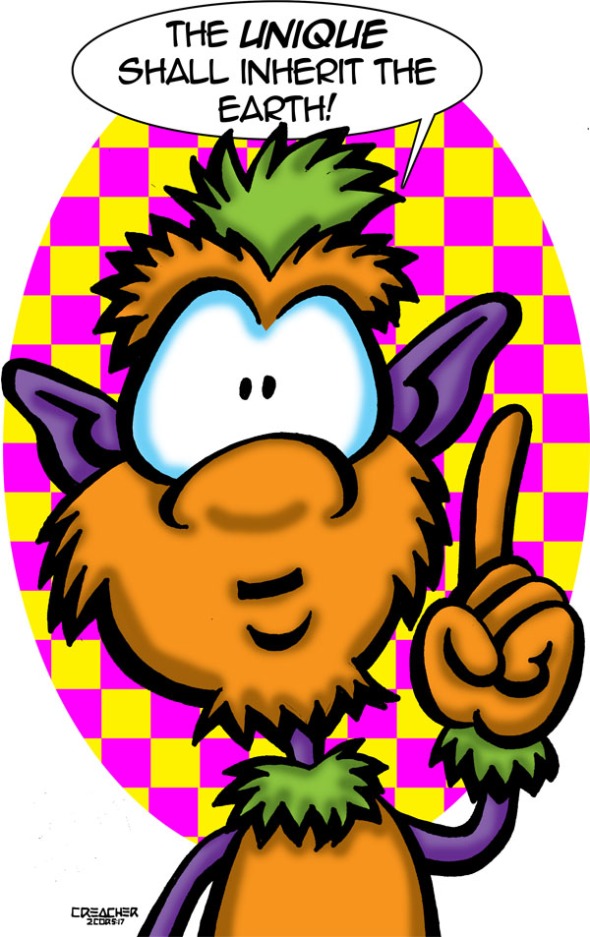 You will never get a different result by doing the same old thing.

Coming off a really rough weekend, that left me dumbfounded and baffled with lots of questions. I thank God for my faith. Sometimes you just need Jesus to carry you through. Your prayers would be appreciated. I have decisions to make

I was watching a TV show where one person was blatantly trying to bully another person into his point of view. The other person asked that they agree to disagree. The bully wouldn’t budge. Don’t be bullied! If someone else can’t agree to disagree, check yourself, make sure you’re not just being stupid, and if you’re not, stand your ground! Might doesn’t make right.

Sometimes the line between crazy and uniquely eccentric is pretty thin. Creativity is often about pushing that boundary. Nearly every great thing we have ever created probably started out looking like someone’s crazy pipe dream.

I’m so tired of hearing people complain about being part of the 99%. I believe there’s another one percent and things would be a lot better if the rest of the 99% joined it. 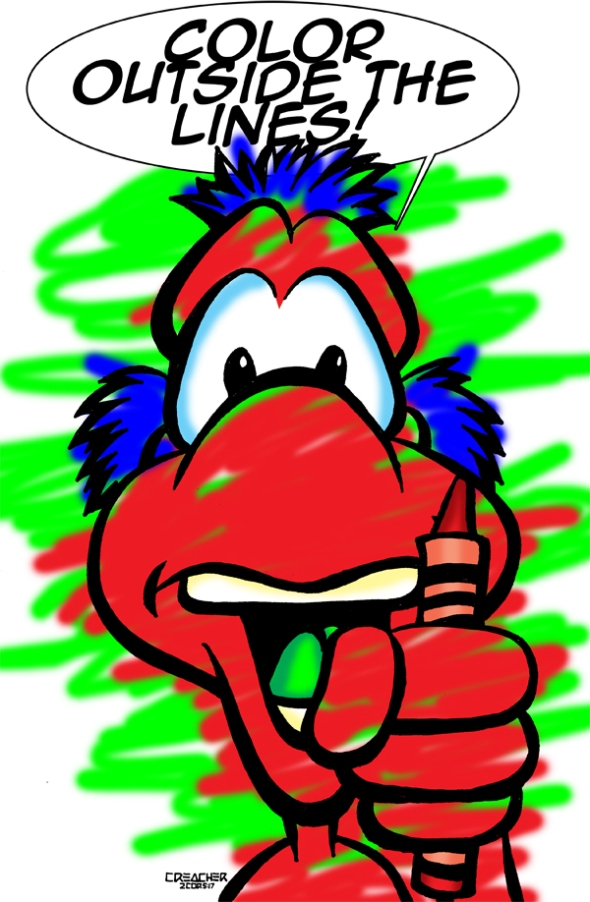 Sometimes boundaries are our friends, but occasionally when it comes to creativity and faith you have to push beyond the man-made limitations and do something remarkable. COLOR OUTSIDE THE LINES. 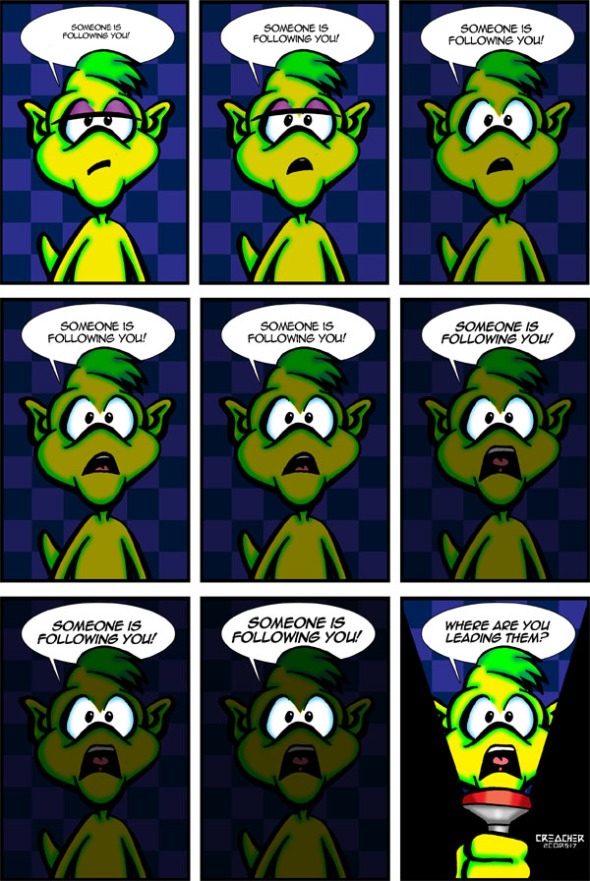 Everybody is a leader of someone. Where are you leading them?

Do people know more about what we’re against or who we’re for? 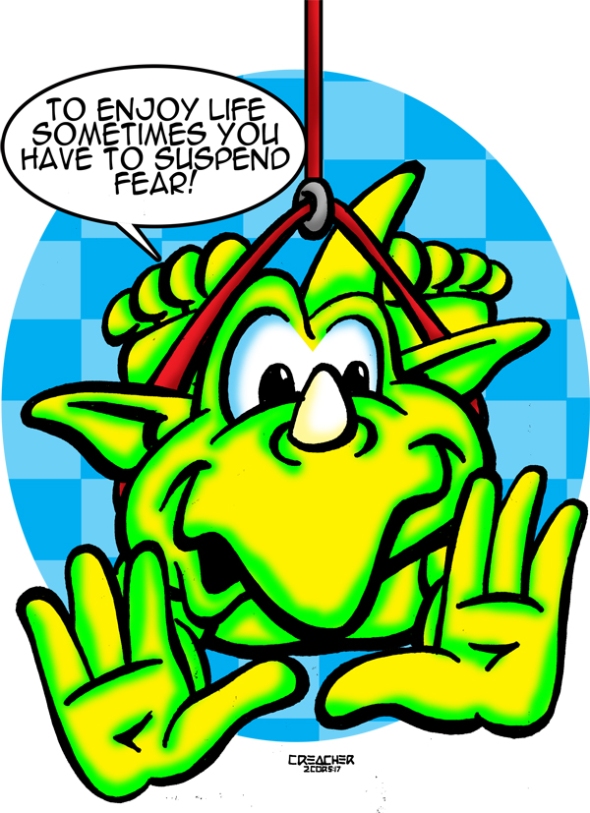 How many times have you left fear hold you back? How many times have you regretted it later.
The Bible says, “For you did not receive a spirit that makes you a slave again to fear, but you received the Spirit of sonship. And by him we cry, “Abba, Father.” (Romans 8:15) The secret to overcoming fear is faith. 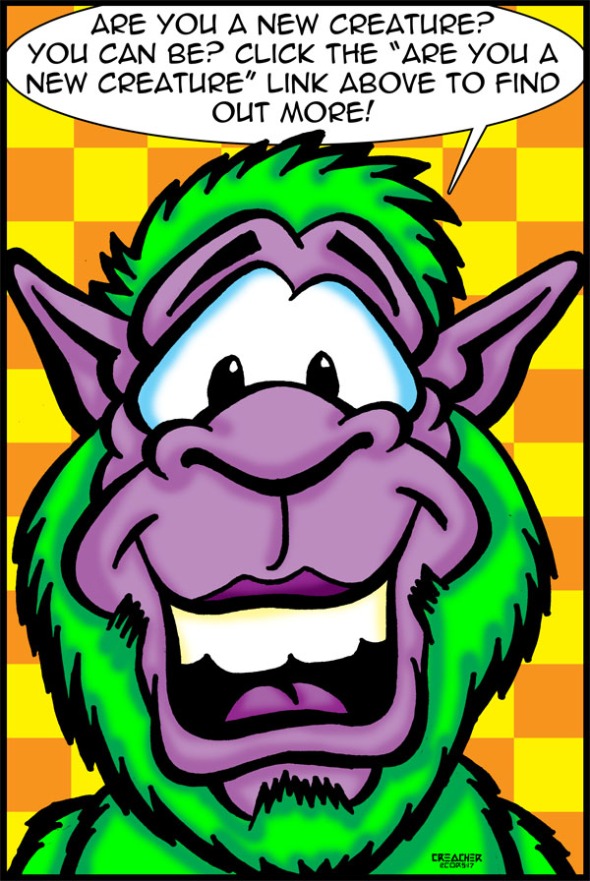 Please understand this cartoon is mainly for believers. Those who are not believers may not agree that God is the supreme wisdom of the universe. If you fit into that group, I have no problem with you. I pray that you come to know and follow God some day. My problem in this one is with the folks who claim belief in God and yet want to disagree with half the things His Word teaches. God is God. He knows what He’s doing and He has His servants write it down through the inspiration of the Holy Spirit for our benefit. When the One who made it all takes the time to tell you how it all works, we ignore it at our peril.

Remember 2 Timothy 3:16,17 “All Scripture is God-breathed and is useful for teaching, rebuking, correcting and training in righteousness, 17 so that the man of God may be thoroughly equipped for every good work.”

Einstein said, “Problems cannot be solved by the same level of thinking that created them.” Andy Andrews said, “You are wherever you are in life because of your best thinking.” That is true more in our struggles than our triumphs. The point of this post is this, we only know what we know, the way to grow and to overcome is to join forces with others who know what we don’t and the God of the universe who knows it all. Remember Proverbs 15:22 “Plans fail for lack of counsel, but with many advisers they succeed.”

We all need our own “brain trust” and Christ must be the head of it.

It’s great to be against animal testing but have you considered the alternative?

Doesn’t it make you the guinea pig?

I thought it was Mark Twain who said this but it was Lincoln. Basically it’s this simple, watch your mouth. As James 3 says 3 When we put bits into the mouths of horses to make them obey us, we can turn the whole animal. 4 Or take ships as an example. Although they are so large and are driven by strong winds, they are steered by a very small rudder wherever the pilot wants to go. 5 Likewise the tongue is a small part of the body, but it makes great boasts. Consider what a great forest is set on fire by a small spark. 6 The tongue also is a fire, a world of evil among the parts of the body. It corrupts the whole person, sets the whole course of his life on fire, and is itself set on fire by hell 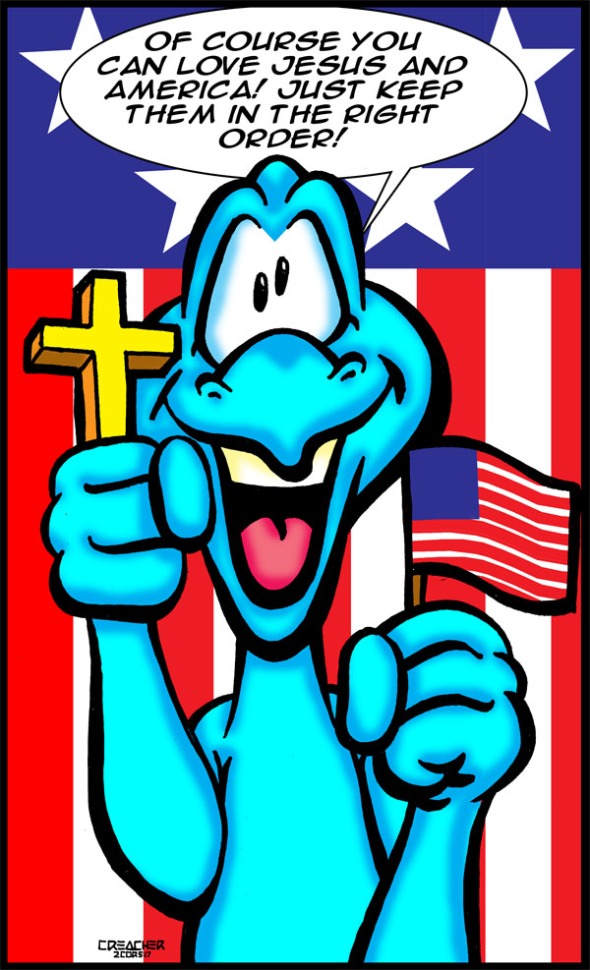 Of course you can love Jesus and America, just keep them in the right order!

Happy Fourth of July!
Happy Birthday America! You are a gift from God! 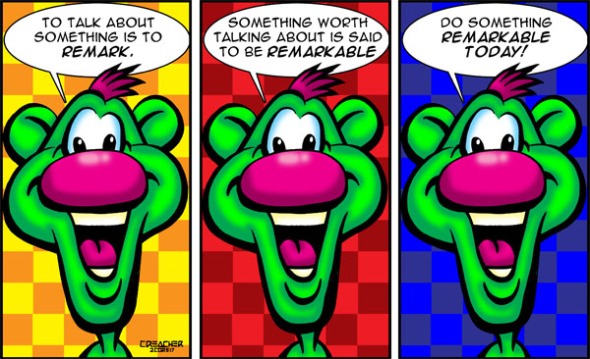 Each day is a choice.
Will you be mediocre or will you be remarkable?
Do something worth talking about.
Be Remarkable! 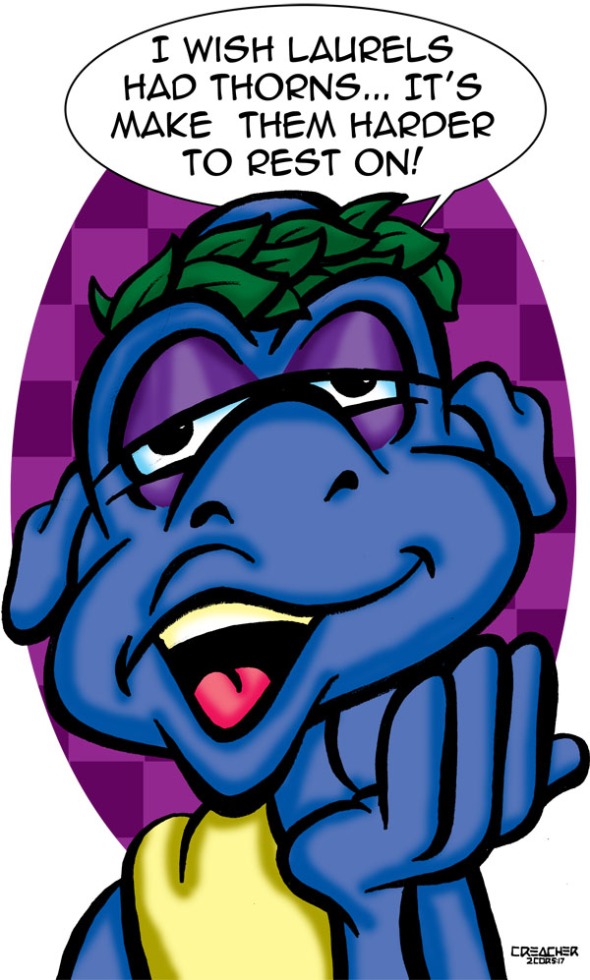